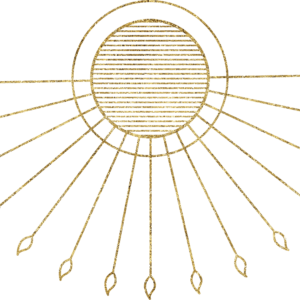 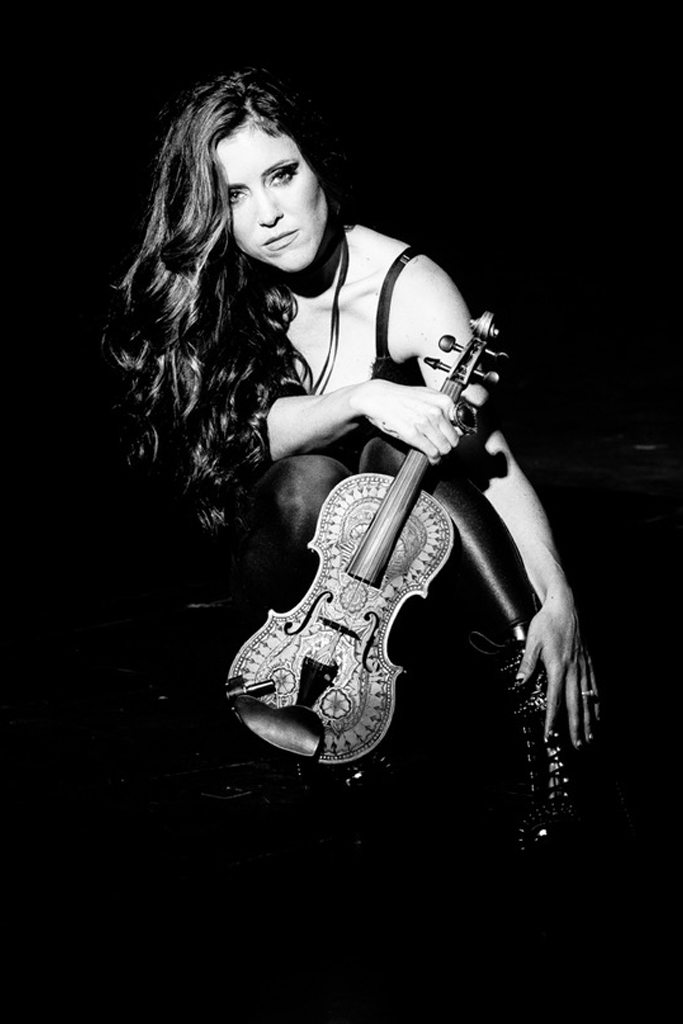 L.A. Based Rock 'N' Roll Violinist, Emily V, is one of the most unique, eccentric, and exciting violinists of our day. Her style is commonly described as a guitarist taking the lead much like Jimmy Page, Jimi Hendrix, and Warren Haynes. She currently performs with the elite musicians of rock band Monkey Finger and Kevin Sousa. She has toured the USA and been a featured performer at festivals, clubs, business conferences, and private events.

She began playing violin at age eleven and has been an unstoppable force since. Awarded a scholarship in Violin Performance, Emily studied Classical music, Theory and Composition, and World Percussion music (African and Brazilian) at Cal State Long Beach. Emily’s love for Rock and Roll, and Blues music began to show when she would sit in with musicians at venues in the Los Angeles and Orange County area. This led to performing both as a solo and side musician for over 15+ years now.

Emily is “Not Your Typical Violinist”. 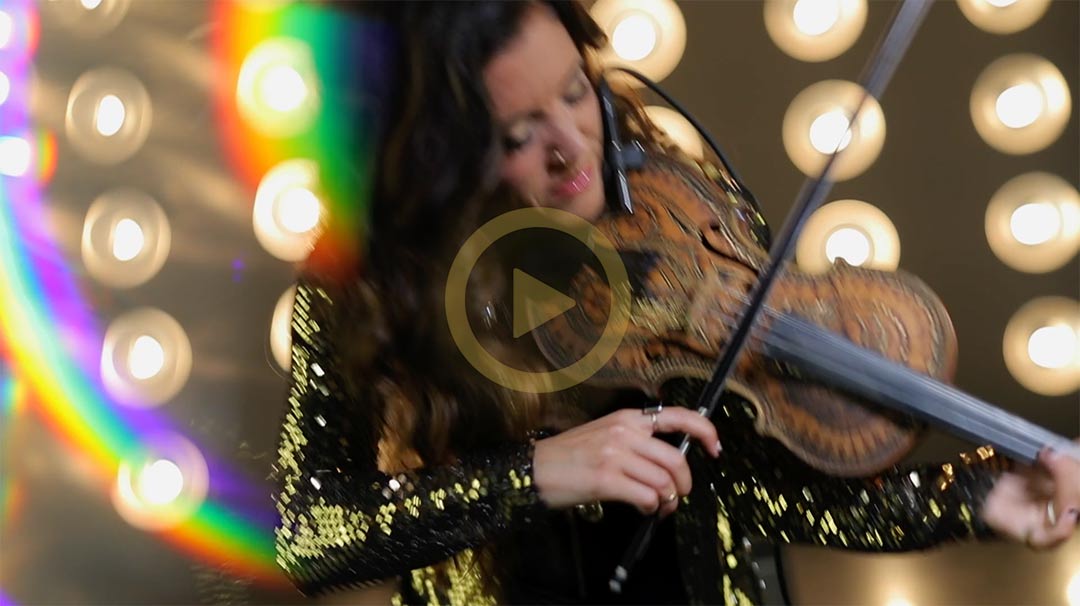 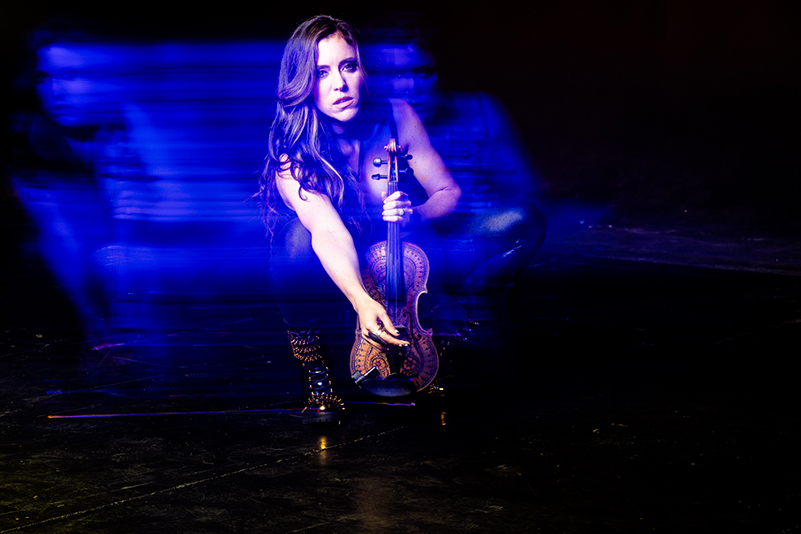 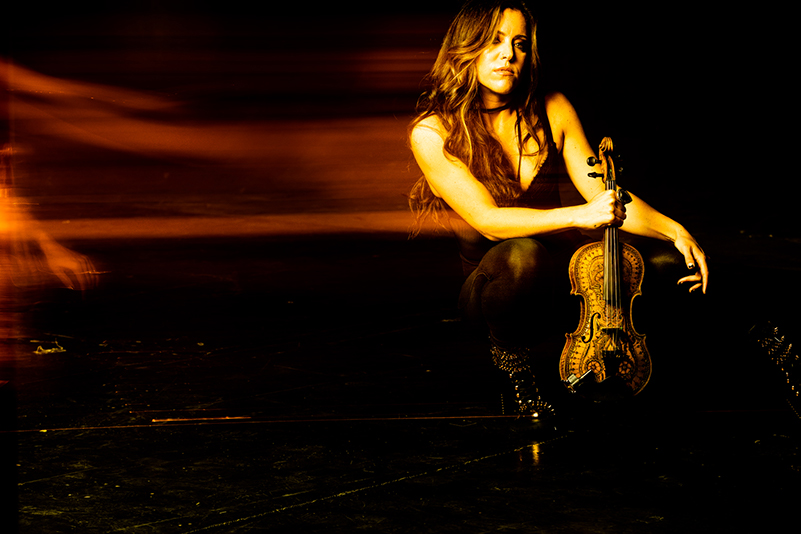 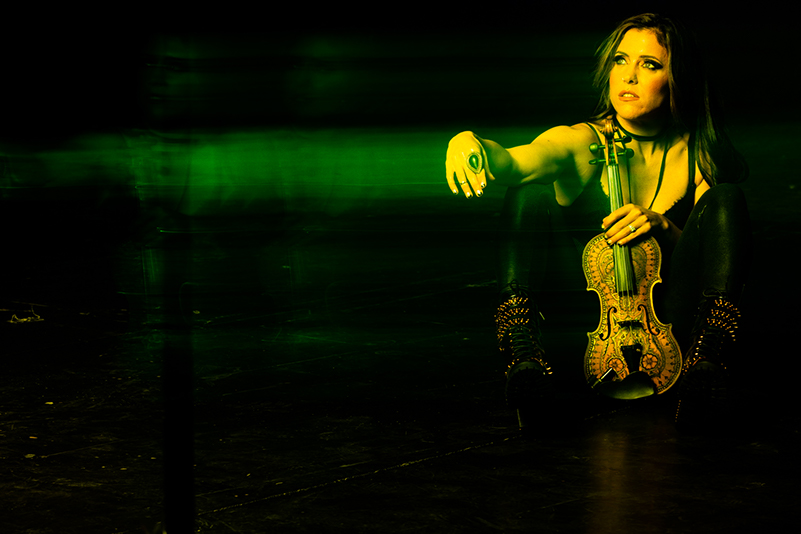 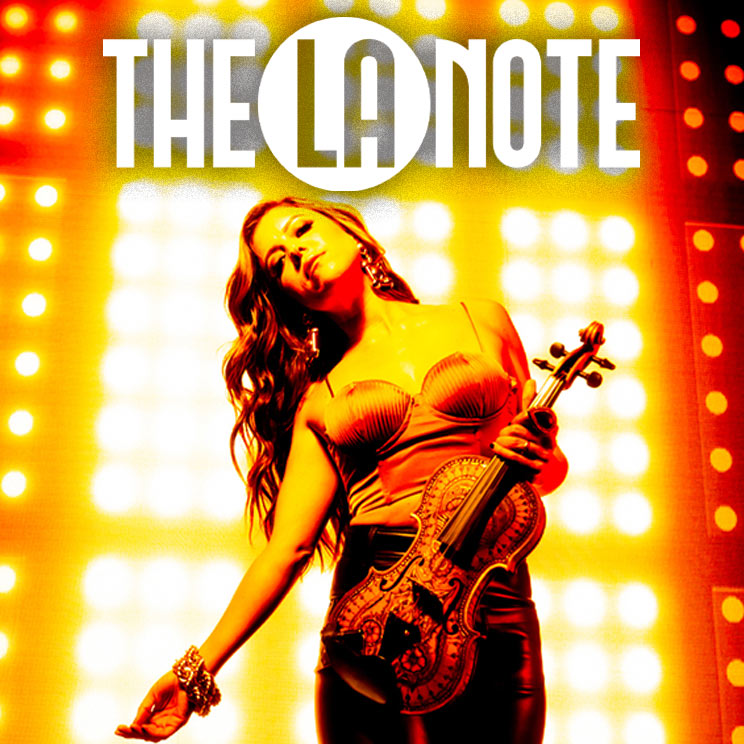 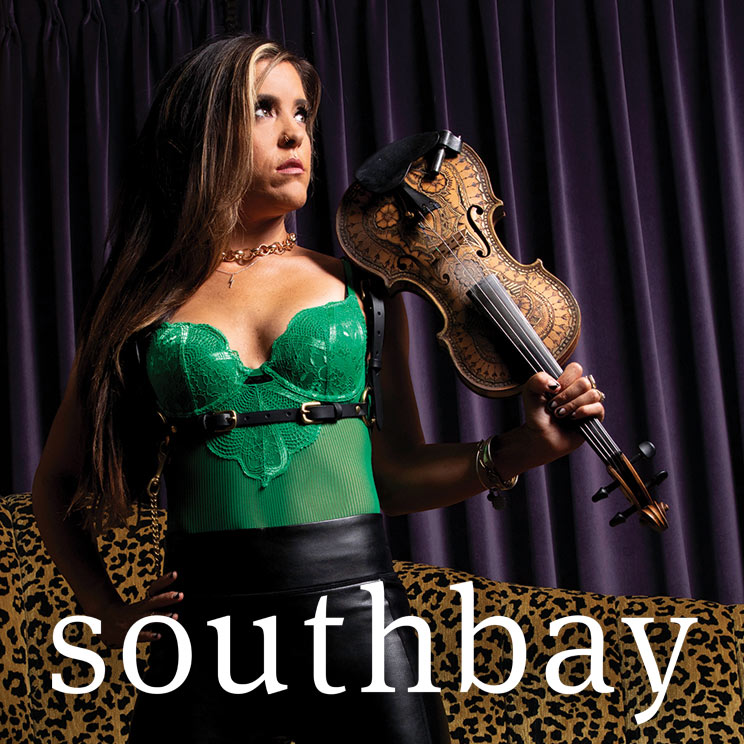 I’ve been like a mad scientist working on a very

I’m excited to be playing at @portcdm tonight (2

Being a musician has been the wildest ride of my l 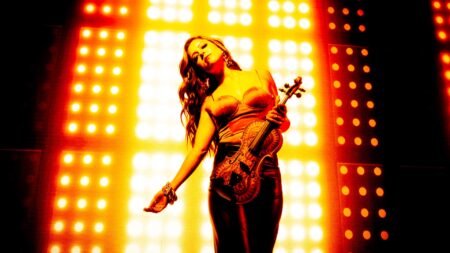 Please introduce yourself. What do you do? Why? What do you want people to know about you?

My name is EMILY V. I am THE Rock N’ Roll violinist. I am #notyourtypicalviolinist. I have been playing violin most of my life. I was raised on classic rock. I perform with several bands playing my violin as the lead instrument like the lead guitarist in a rock band. Think “Jimmy Page” or “Jimi Hendrix” BUT on the violin.

I have performed with artists such as: Walter Trout, Lukas Nelson and The Promise of the Real, Blind Melon, The Adicts, Donavon Frankenreiter, members of The Who, members of Oingo Boingo, members of Crosby Stills and Nash, etc just to name a few. This year, I am recording my first ever solo album!!! I am coming out as a Rock Singer AND Rock Violinist. My album is heavily influenced by Stone Temple Pilots, Led Zeppelin, Alice In Chains and Mad Season.

My current album features other artists such as Nik Hughes drummer for Bush, John Avila bass player for Oingo Boingo, and Eric Dover guitarist and singer for Slash’s Snakepit. I am currently gearing up to release my first single and music video along with new merchandise! It is a very exciting year planned! Lots of performances booked and will be headlining for the first time as my own self titled artist as “Emily V” for some festivals coming up. 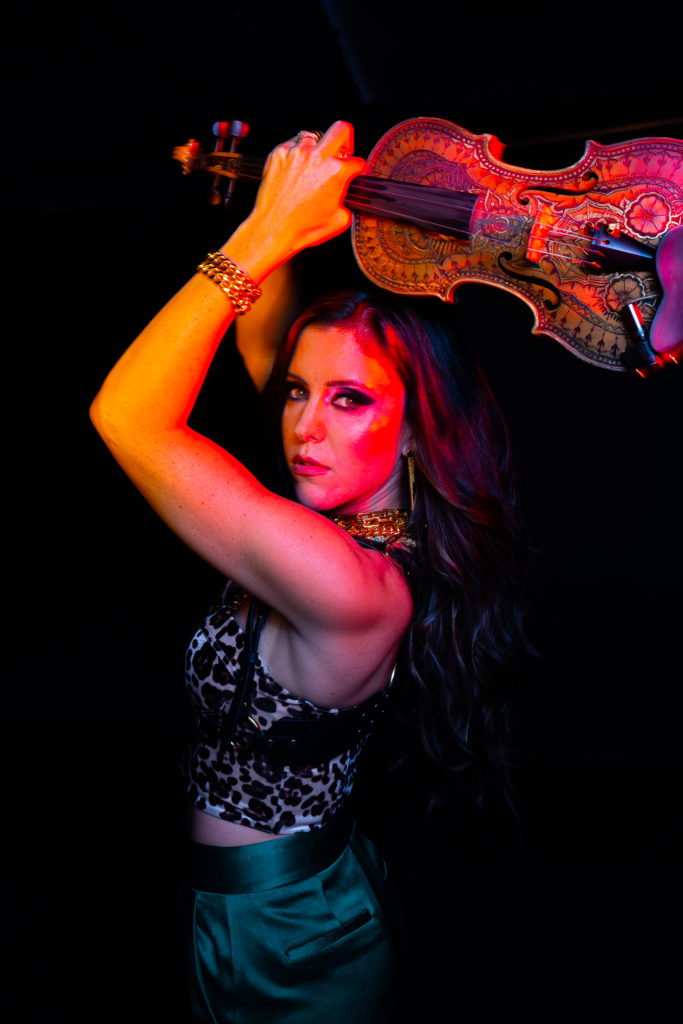 What qualities make you different and unique from everyone else in the industry?

I am one of one. There is literally not a current “Rock Violinist” alive that plays like I do. My passion and energy for being on stage is one of the most eclectic and exciting performances for anyone. I have experimented with many guitar and bass pedals to create a unique tone collaboration of deep guitar like sounds with sensual violin singing mixed in. There is nothing I was put on this earth to do other than to open people’s minds to the possibility of what the violin can really do. I want to take them on a journey every time they see me perform.

Describe THAT moment when you realized you’re doing what you were born to do.

I’m not sure there is just ONE moment. I can think of a few… but there is on that sticks out in my mind: I was performing with a band I ended up playing with for several years. It was near the beginning of my era with them. We had a residency every Sunday and we packed the place to the brim literally every show. One day we played a song that featured me heavily.

I closed my eyes and felt my solo come from the deepest part of my soul. As the solo climaxed, I opened my eyes to a sea of excited eyes and waving hands. When the solo ended, the whole entire room erupted into a thunderous applause accompanied by hoots and hollers. It took me by such surprise, I broke into tears. The energy in the room was palpable and had taken over us like a zombie apocalypse but that was a true moment I knew I was on my most perfect path. 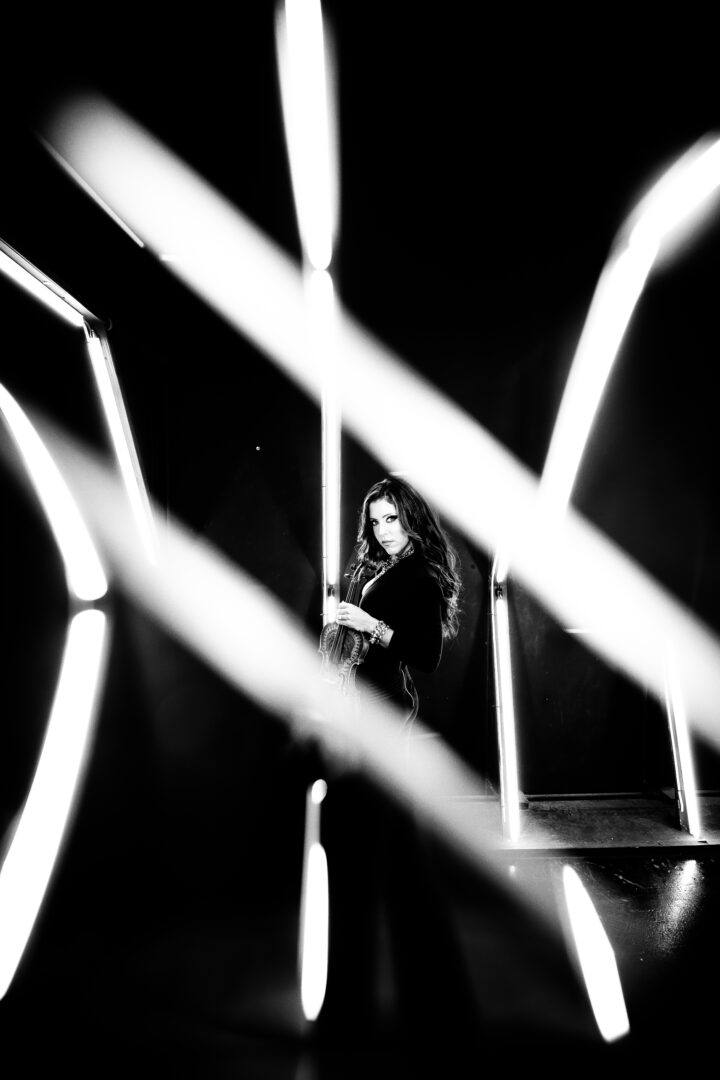 What’s been the biggest challenge you’ve had to go through and how did you grow through it?

My biggest challenge has been that I am so unique in what I do. It is both a blessing and a curse so to speak. When people see me, they are so enthralled and captivated. If people don’t see me, they literally don’t know that someone like me exists. I have had to make sure I am present on as many platforms as possible for other artists, bands and promoters to see me and collaborate with me.

If I can keep my visibility high, then I can conquer every stage of my dreams! It takes a lot perseverance to keep working through this struggle. I have grown to be more confident in finding my voice and sound and presence on stage to keep sharing videos of myself performing. You have to have thick skin to keep up in the entertainment industry, and that’s exactly what that’s done for me.

Who are the TOP 3 people you’d want to meet that could elevate your career or business?  Why these specific individuals?

Dave Cobb – I love his work as a producer and love the Rival Sons (who he has produced as well). My dream is to also perform with the Rival Sons.
Linda Perry – I have watched her work for years and love her energy and the musicians she has produced and worked with. She is extremely talented. I would be honored to work with her and I believe she would connect me with some amazing talent!

Shep Gordon – Shep has been such an influential person in the music industry and has done so many amazing things. I would love to work with him. I believe he would be able to elevate my career by introducing me to so many people in the industry.

For Emily Kilimnik, also known as Emily V, it was love at first sight. At just 5 years old, she had an instant affinity for the violin. The only daughter of a family with six kids, she learned that hard work and practice get you noticed. Her passion to follow her own path paid off with a signature style that has been likened to a female version of Jimi Hendrix—with a violin rather than a guitar.

Atascadero, midway between San Luis Obispo and Paso Robles, was home to young Emily. Unlike the South Bay, strings were not an option in the elementary schools there. Her love for classic rock began at home while the family did the household chores or cooked with The Rolling Stones, The Doors, The Beatles and especially Pink Floyd filling the walls.

“I remember my dad would come home from work at night, and he would go into the office after dinner. He would lay on the ground and listen to music,” Emily says.

She would listen to her father tell stories about what the music was about and the meanings behind the songs. Emily specifically remembers him talking about the Animals album by Pink Floyd, released in 1977. She also credits her parents for introducing her to It’s a Beautiful Day, a psychedelic rock band from the late 1960s that featured an alternative violinist.

At 16, Emily paid a neighbor $50 for a violin—a bargain compared to the ones many of her friends owned. With her violin in tow, she would sneak into the practice rooms at Cuesta College to play before she headed to work. One Friday afternoon, she was confronted by a professor demanding to know what she was doing there. He asked her to play a song, and she nervously complied. Expecting to be reprimanded, she was told that she was now a music major.

“Her tone and performance are enchanting, sexual, sensitive and flat-out rock ‘n’ roll all at once.”

But it was not until she received a partial scholarship to California State University, Long Beach that she really started to branch out and “figured out her rig.” Although she majored in violin performance, she also studied theory and composition as well as Brazilian and West African percussion. Soon she became one of the main West African dancers for that class.

While in college, Emily worked as a waitress and taught violin lessons to help cover the costs of her education. Still in her uniform, she would go to the Irish pub next door because they had bands playing five or six nights a week. She got to know each of the bands, and eventually they invited her up to play with them.

Classical is not Emily’s genre, and she says there are purists who believe she sold her soul. While classically trained, she figured out a rock style for herself, flipping her violin upside down to create her sound. “I’d never seen the violin played that way before. It was like Hendrix had birthed a child with Janis Joplin and Stradivarius,” says musician and friend Kevin Sousa.

Her passion, energy and talent are unmistakable as she jams on stage. Locally she is known for playing alongside Kevin or as part of the band Monkey Finger Duo. Emily has toured with iconic punk band The Adicts and has performed with Gov’t Mule’s Jorgen Carlsson, Lukas Nelson, Blind Melon’s Travis Warren and Jimmy Paxson, drummer for Stevie Nicks.

Emily has her sights set on a solo career too. She is working on an album with producer Johnny Avila, formerly of Oingo Boingo. “Emily V plays her own unique style of rock and alternative violin that will satisfy your soul,” shares Johnny. “Emily V rocks hard!”

“Her tone and performance are enchanting, sexual, sensitive and flat-out rock ‘n’ roll all at once,” adds Kevin. “Emily provides an edge to our music that drives the band and lifts us up at every live show. In a word, she is stunning—sonically, physically and charismatically.”

After watching her perform, it’s apparent that everyone is left with the feeling that they were lucky enough to have just witnessed a true rock star.

Visit southbay.goldenstate.is for the full article with more of Kat's amazing photography.